I’m still getting settled into our new apartment and it’s going great so far. But I wanted to share a bit more about why we decided to move and the journey up to this point in our lives. It’s been a long road filled with lots of memories.

I still remember dreaming about making the move to New York while I was in San Francisco. As I sat at my grey cubical responding to emails and wearing one my many pencil skirts, I would dream about how amazing life would be in New York City! It was simply where I needed to be.

My dream would come to fruition when I got a promotion to a Field position with Oracle. Words cannot express the joy and happiness I felt as I knew this was the moment I had worked so hard for. I raced home to celebrate with Matt and begin making plans for what was to come. Matt is spontaneous as well and he immediately wrote his director an email requesting a transfer to NYC. We were both so excited but were going to miss our little one bedroom apartment in Russian Hill.

Shortly after we both got the thumbs up from our employers, we booked our flight to NYC to go look for an apartment. We were not at ALL prepared and simply underestimated the complexity of locking down an apartment in Manhattan when you don’t live there. The time, the paperwork, the MONEY! Never had we felt more underprepared. 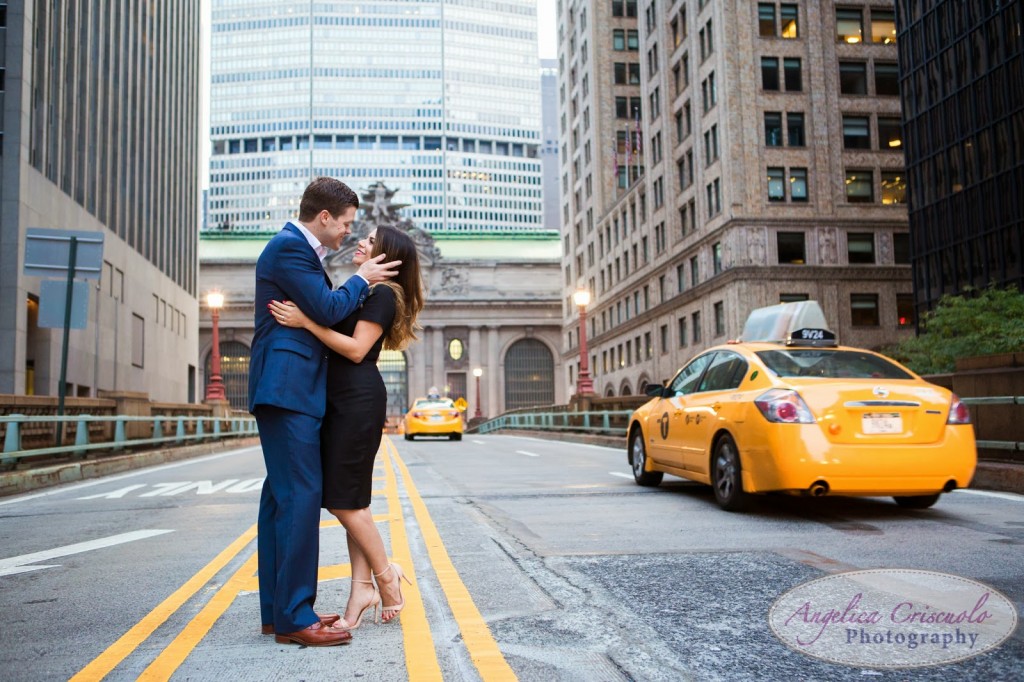 I’ve told this story before, but I setup tons of apartment viewings all over the city. Luckily the broker we worked with at the time showed us several apartments that were not on my list. One of these ended up being the apartment we rented. As we sat on our future street, it was beautiful. We loved all the buildings and brownstones except this really ugly one on the south side of the street. Our broker met us and as we started talking, she said she wanted to show us this “one” apartment with the million dollar view. Guess which building it was in? Yes, the really ugly one. Also, If you ever hear someone offer up a million dollar view, be somewhat skeptical. In this case, though, she wasn’t kidding.

As we entered the foyer and headed up the elevator, we were excited to see our first apartment in the city. But wow, what a letdown. The apartment was in rough shape. I almost started to cry. Who is this lady? Why would she take us to this apartment? There was a grocery cart in the living room with paint cans, rollers, calk guns, etc. As we walked around, Matt and I looked at each other, shaking our heads. We finally opened the patio door. Now we understood what she was saying. It was the million dollar view. It was a clear shot of the Empire State Building and lower Manhattan. I was blown away. However, I wasn’t sold just yet. Even the views from the kitchen and living room were amazing, but we were so turned off by the appearance of the actual unit as it needed a lot of work.

We left and our broker started showing us other apartments. That’s when reality set in. They were shoe boxes with windows looking at the building next door. Yes, a couple had new features and were updated but just no character and certainly nothing even close to the views. As we viewed a few more, we kept thinking about that first place and how we could fix it up. You can’t create the views. She only showed us about 3 apartments before we said we wanted that first apartment! It was kind of love at first sight, even if we didn’t realize it at the time. Now, all we needed to do was get the money, the paperwork, etc before someone else outbid or grabbed it before us.

Somehow we managed to get pay stubs, credit checks, letters of employment and lots of money together for the apartment. At the time, we had an amazing rate on the apartment, but someone else (supposedly) at the last minute offered a higher rate. So we had to match it in order to get it. The following morning we woke up to an email from our broker confirming we got the apartment. We were beyond thrilled! Life was about to start in New York and we were over the moon!

This is when life really started to go a million miles an hour. I think we moved in on the HOTTEST day of the year. It was 110 degrees outside. (ok, so maybe 90 or so but it felt like it) and the doorman wouldn’t let Matt into the apartment(where’s the crying emoji sign). Apparently, we hadn’t yet signed a waiver we needed to. Thankfully a couple hours later, our doorman got a call from the front office and then let us into our apartment. That night we sat on the patio and drank a bottle of wine. We both realized how lucky and happy we were to share this experience with one another.

The following weekend, I was finishing up my coffee on the balcony before we headed over to Ikea, and Matt walks out with a serious look on his face. I didn’t know what to think. What is happening?

He proposed. Right there on the balcony. In our pj’s.

It was the most amazing way to start our story in Manhattan. It was a beautiful time for us. I think I planned my whole wedding that evening. The next year had us on a tight budget. This probably wasn’t the most ideal way to start life in the city as we paid for the wedding ourselves. At a time when we thought we’d have the luxury of going out to eat, traveling and enjoying the city, we were home in our apartment eating rice and chicken and planning. There were a few times that we reconsidered this path. In retrospect, it taught us to value money, time and the art of budgeting. It was a good lesson to learn, especially for our first year in this crazy city. For some of our money-saving tips be sure to check out this post.

That following summer, we packed our bags and headed to Mexico to get married! It was the best time of my life. Thank you, Matt, for making it such a beautiful weekend.

We came back home and life started. Our careers were going well. Both of us started to hit a stride at work. Something was missing though. We always dreamed about having a dog, so we got Batman over Christmas. That was such a special time for us. However, we had ZERO clue what we were getting ourselves into as puppy owners in the city. Thank goodness we had a balcony. It eased the burden of going down the elevator every time he needed to go out. We covered our floors with potty training sheets and over time we got the little guy potty trained. Batman left a few marks in the apartment. But it was worth it! 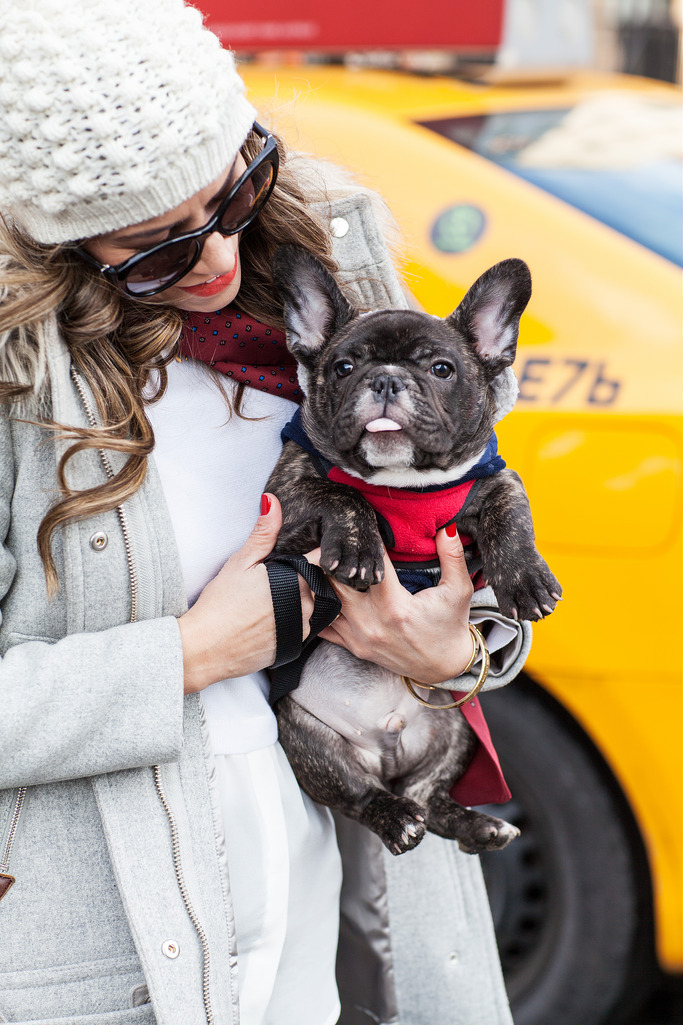 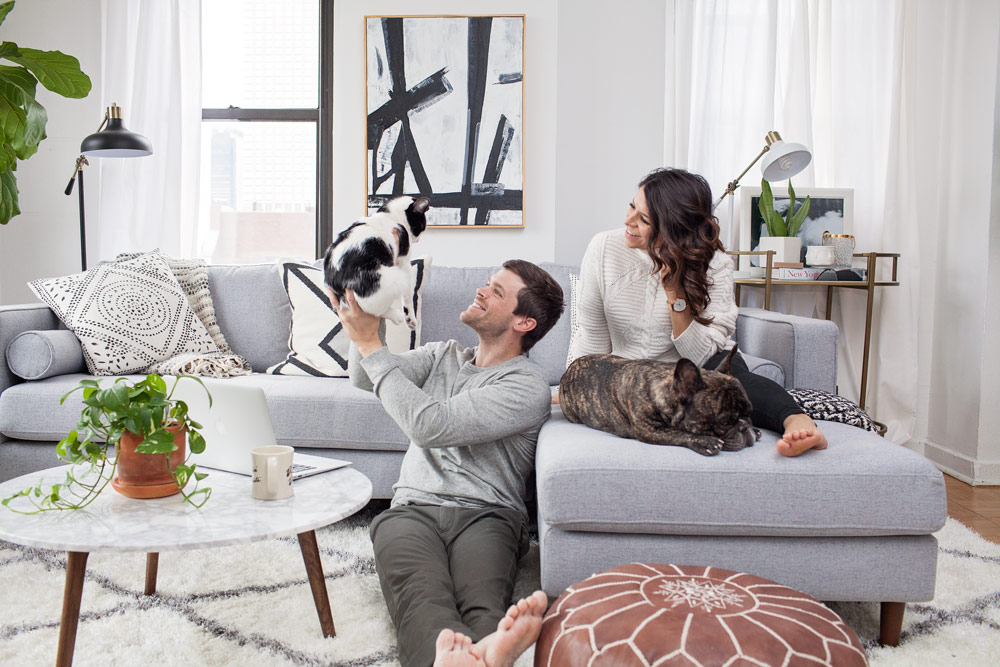 Fast forward to summer and I somehow convinced Matt to adopt a cat. We went to Bidawee to “look” at kittens that were currently up for adoption. Guess who I spotted, tucked away in the corner, Pfeiffer. At the time, her name was Malibu. It took everything in me not to adopt her on the spot. We went back home and I made my case to Matt. That Saturday, he finally “approved” adopting a kitten. I called the adoption center and she was gone. They took all of the kittens out for an adoption event. I packed up my bag and brought an animal carrier and went to 142nd street to adopt Malibu. Still, to this day, I’m beyond grateful we welcomed Pfeiffer into our lives. She’s been such a beautiful part of our family. I LOVE you, Kitty! 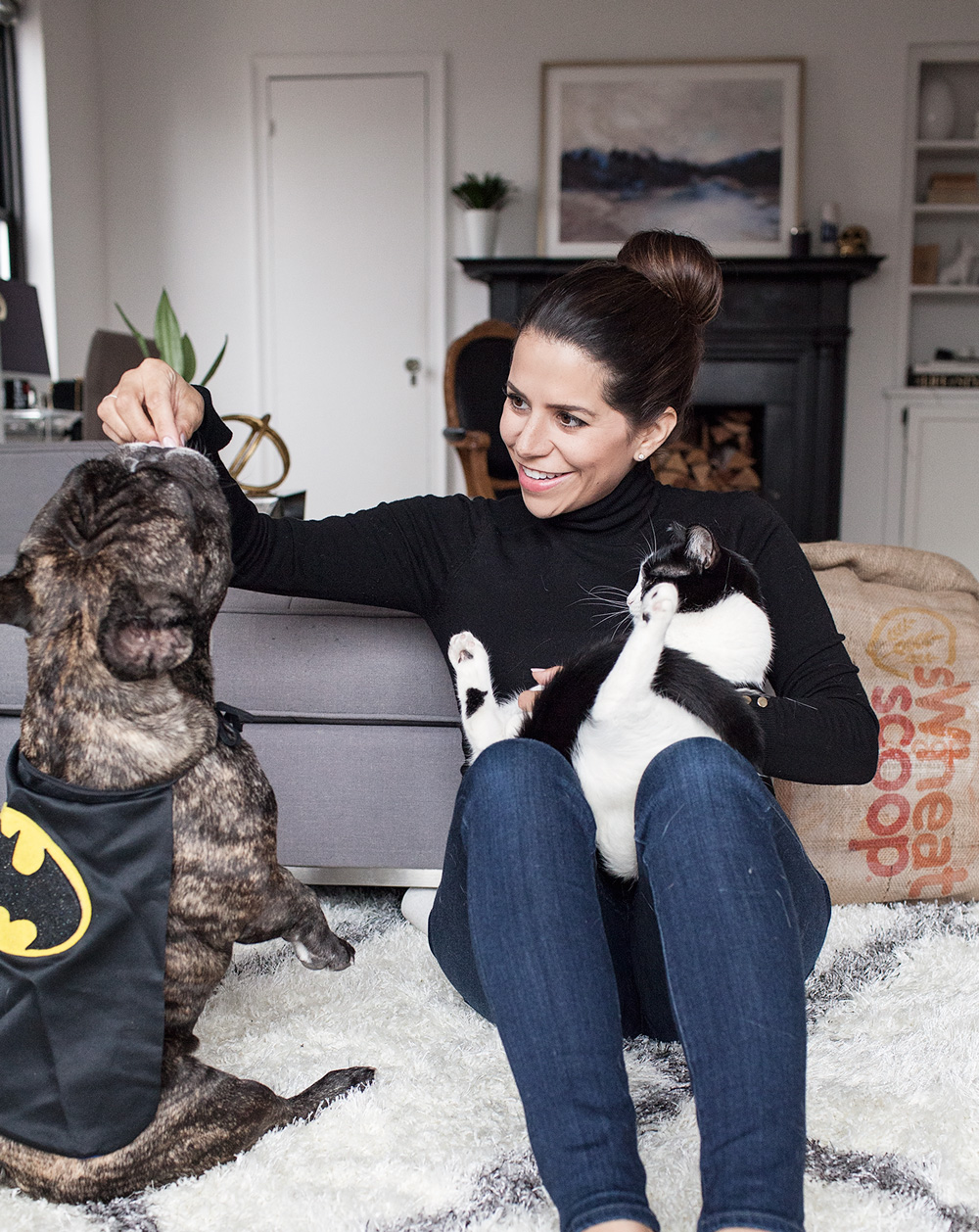 Hello, 2016. That year, Matt and I saw the most change in our careers. I was finishing up my first year at Salesforce and I didn’t feel like I was in the right place in my career. Matt was also experiencing something similar.

That year, I had the opportunity to attend the Superbowl with my Dad. I loved being able to share such a cool experience with him. One of those once in a lifetime things. It was also a huge weekend because I found out I was pregnant as well. Crazy but a week later, we came to find out that I was no longer carrying. Matt and I weren’t trying. It just happened. Once it did though, we realized that we wanted to welcome a baby into our lives.

Shortly thereafter, I decided to leave my corporate job to pursue my blog full-time. On a Monday, I told Matt I wanted to leave my job and that Tuesday morning I put in my resignation. As I stood in my living room, I was somewhat in shock. I was leaving my corporate career to pursue something completely different. I’m still so thankful Matt supported me throughout this process. 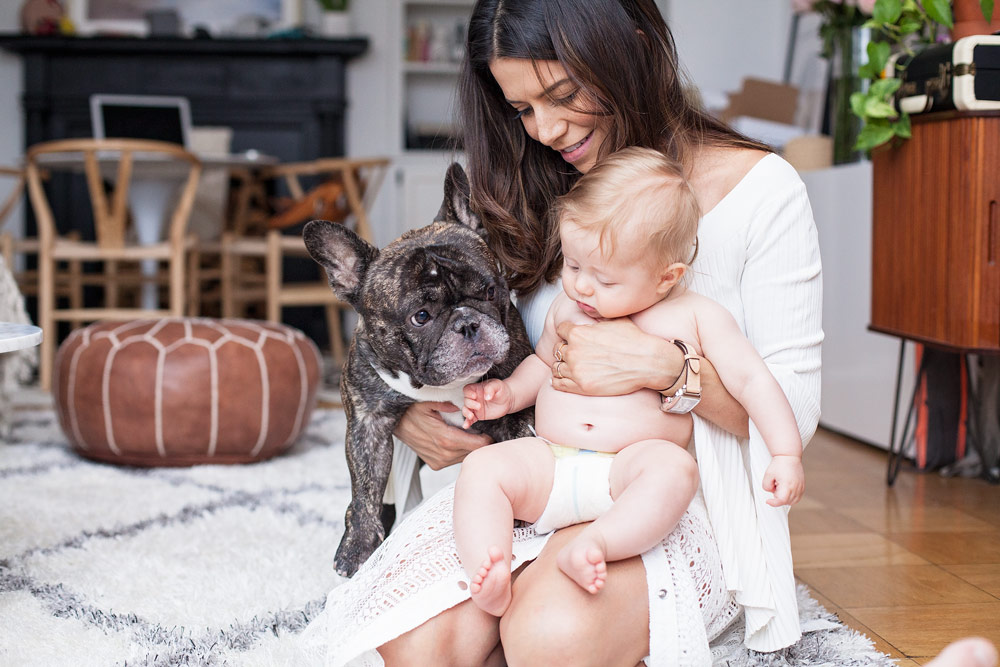 A few weeks later, I discovered I was pregnant with Sebastian! I remember the moment I knew I was pregnant. It was at dinner with my best friend, Kristen. “I think I’m pregnant.” As I took a sip of wine, I just had the feeling. That evening I went home and I was right! Baby was due to arrive in December 2016! The next 9 months were filled with buying every baby product on the market and building out his room.

The morning of December 9th, I woke up and it was time. As I lay in bed with the animals next to me, I fought my way through the contractions. Crying and grabbing as much as I could (next time I’m packing a hospital bag), we made our way downstairs. The doorman, the same one who wouldn’t let us into the apartment the day we moved in, flagged down a cabbie and gave him the sternest talk about getting us to the hospital safely. We walked through our front door and right into the cab. This was the longest cab ride!

A few days later, we walked through those exact same doors with a new baby, baby Sebastian. As we welcomed him into our home, with the animals, we slowly started to get everyone adjusted. It took a few months, actually years. I think they’re still adjusting to each other!

We celebrated my birthday, Christmas and New Year as a family of five! 2017 is when things really started to pick up. I became more focused and had the opportunity to really build my business. I hired my first and then a second employee. The business grew, but the space still stayed the same. 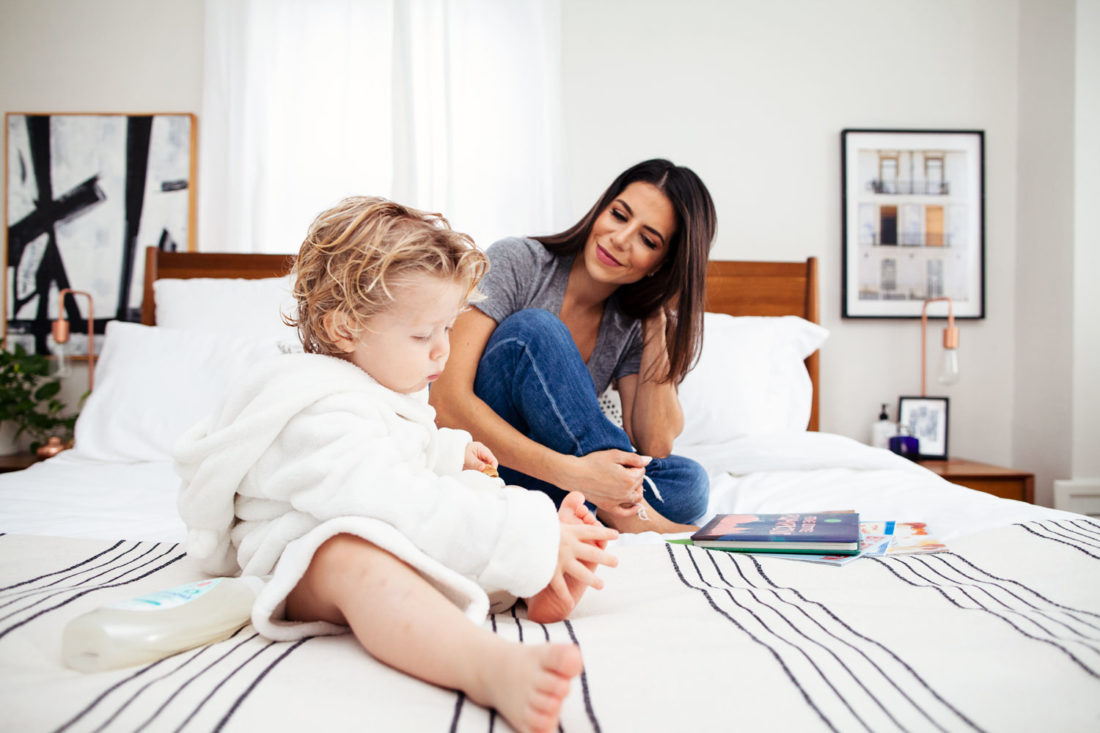 So, as you can imagine, the reason we moved is that we needed more space. Matt and I were no longer two, but now five with a business and employees. We thought about renting a studio apartment and using it for my office, but we got lucky and the apartment below us was currently available to rent. The apartment has three bedrooms, a huge kitchen and a living room with our million dollar view.

My first New York apartment was everything I imagined it to be and so much more but now it’s time to move on to our new home and new memories. Thank you #2200. <3