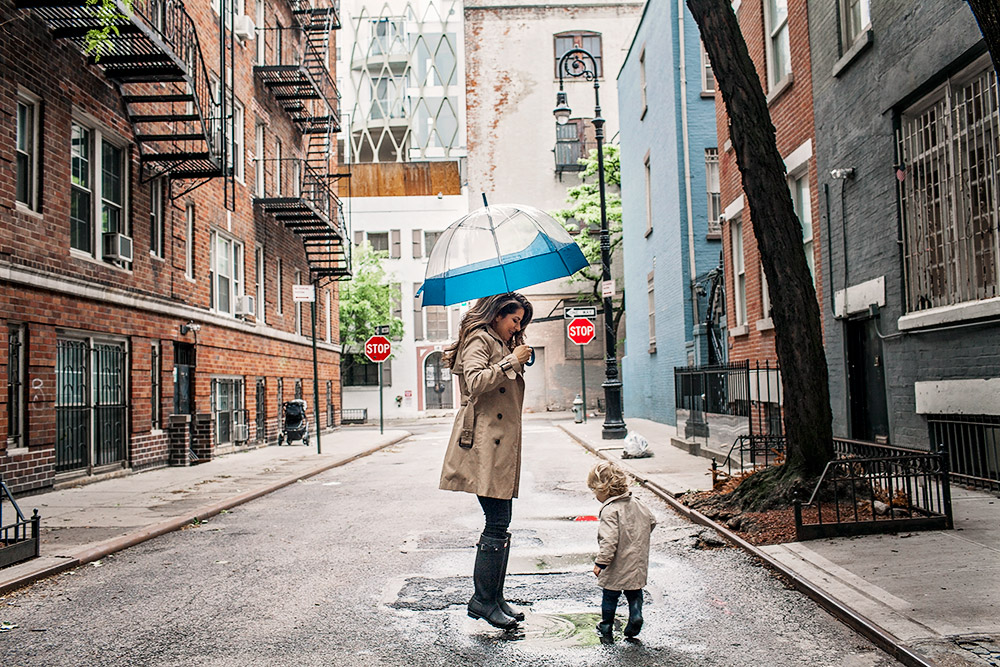 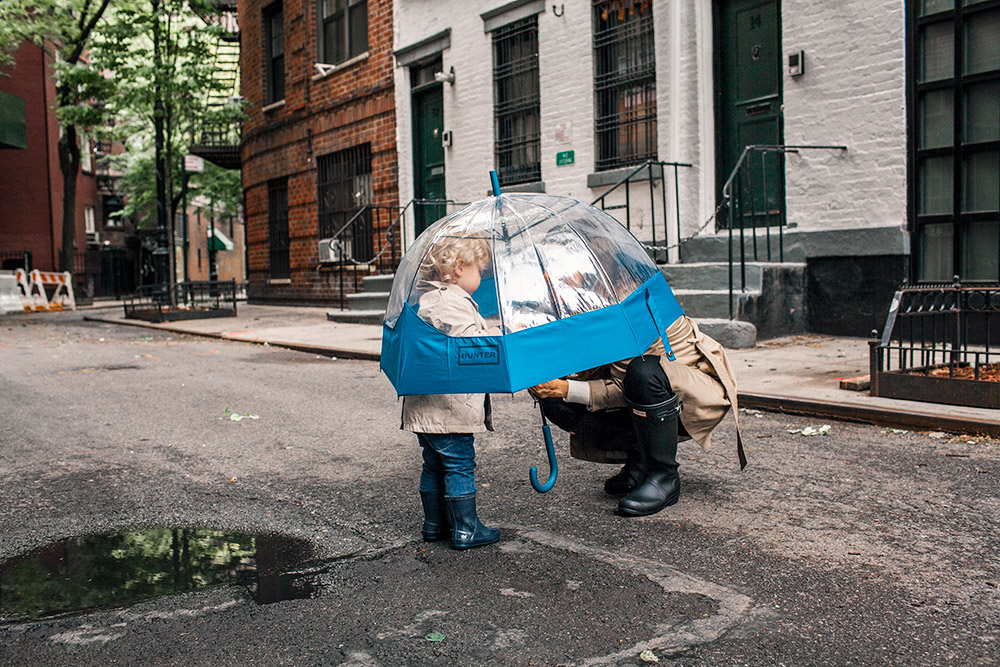 Matt and I grew up in the midwest with what most would consider a traditional childhood. We played hide and go seek in the backyard, made friends with the neighborhood kids, and played kickball in the middle of the street. I’m sure a lot of people imagine their kids will grow up the way same they did. Instead, we found out what it’s like to raise a kid in New York City. 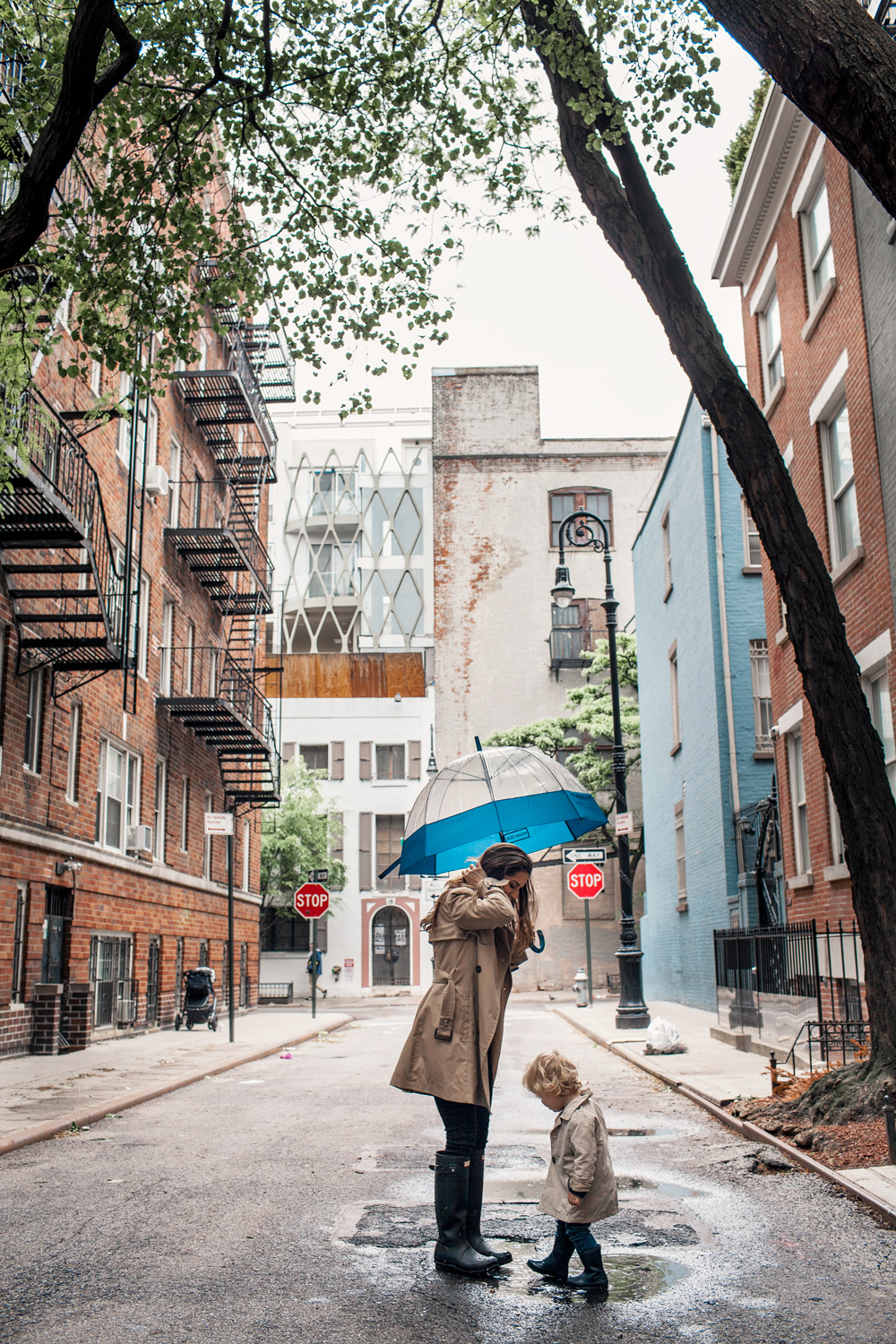 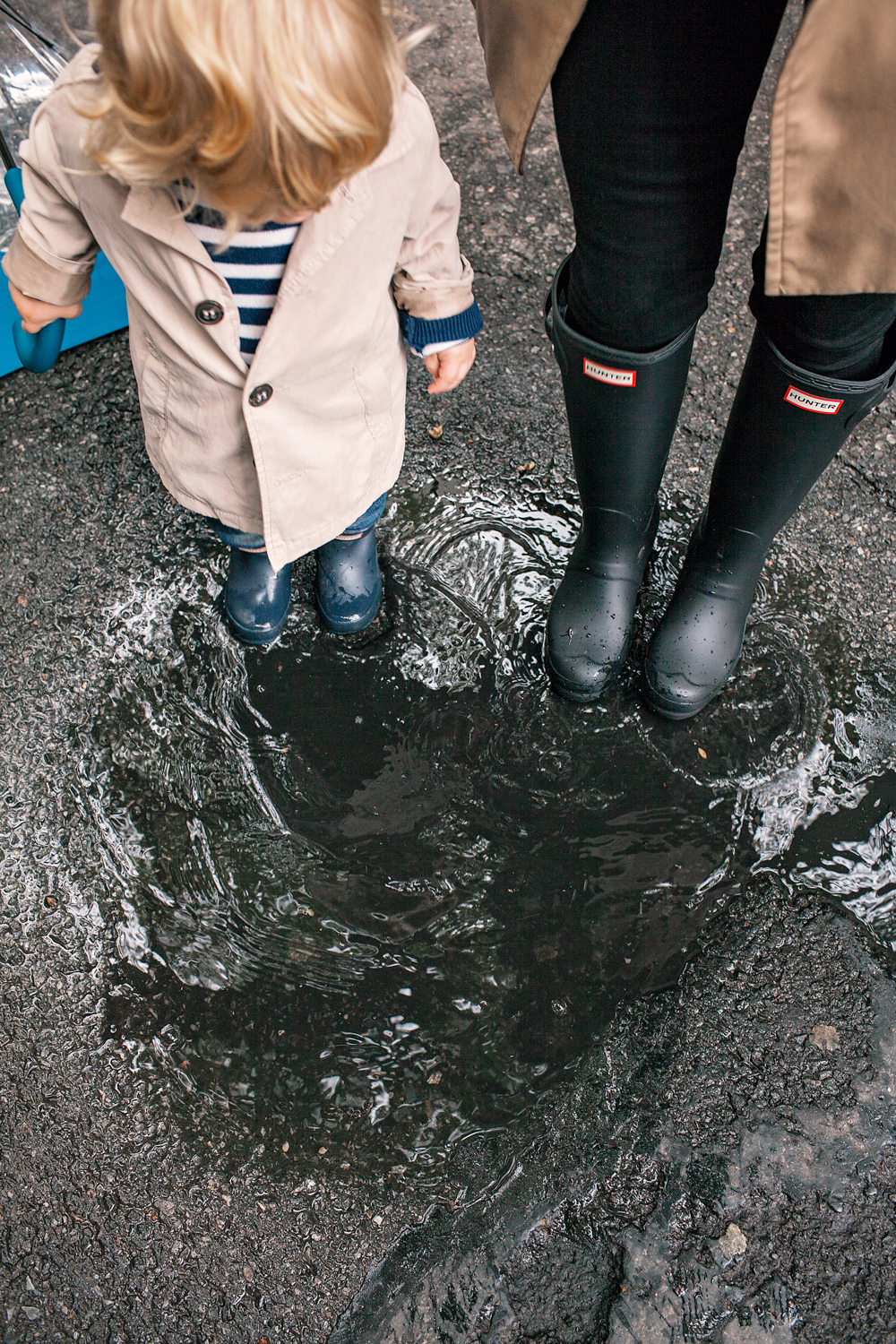 When we first found out that we were expecting, the first question from everyone, or should I say comment, was “You’re not going to raise your baby in the city are you?” I bit my tongue and tried to remind them that people have been raising children in large cities foroever. It might be a bit harsh but people also project their fears onto you. I don’t think people really thought we couldn’t raise Sebastian in the city. I think they feared that they couldn’t raise their children in the city. This will likely rub a few people the wrong way. I’m ok with that but I think the fear of raising children in New York City is a little outdated in my opinion.

Yes, of course, it would be easier if we lived in the suburbs, or would it? His pediatrician, indoor playground, park, daycare, hospital and local drugstore are all within 5 minutes walking distance. However, it can take a very high level of patience raising a kid in New York City. It’s not terribly kid-friendly… at all. Most elevators don’t work. The streets are crawling with people. Restaurants don’t have changing tables. The list goes on and on. I think that’s why they say people who were raised in New York are so tough. They adjust fast and learn to make the world work for them.

When Sebastian was a newborn, we stayed in our neighborhood. We didn’t like him being in a car. I call this the Matt & Olivia new parent fear. But when we did need to take him out and about, we used the UppaBaby, which comes with a car seat attached to the stroller. This was a huge lifesaver for us. Batman loves sleeping below Sebastian in the stroller. I also used the Solly wrap. I’d wrap up my sweet baby against my chest and take him on his next adventure. He loved going with me to meetings, previews, and on errands. It was amazing! I loved him being attached to me. It reminded me of my pregnancy.

How do we take him to point A to point B in the city without a car seat? In New York City, there are no taxi regulations for children to ride in car seats. Children under the age of seven are permitted to sit on the adult’s lap. I know you’re probably thinking, “Woah, that’s dangerous.” Yea, I think the same thing. It was something that took a lot of adjustment as a parent, sometimes you’re in a bind and can’t take the subway or walk, so you have to take your child in a taxi without a car seat. A majority of parents do this in the city, but few ever admit or share on social media for fear of the backlash from others. It’s kind of the unspoken truth of parenthood in NYC.

The way we’ve gotten around the whole taxi situation is by taking the bus. You know how I feel about the buses in NYC. I love them! But you’re required to take your child out of the stroller when riding on the bus. This poses another problem, especially if you’re on a crowded bus.

As for the subways, you need to check to make sure your station has an elevator. That’s the most ideal situation, working elevators at both your starting point and destination. If not, you just have to ask someone for help. I actually do not take the subway with Sebastian. If I’m with Matt, I’ll take it, but if it’s just me I’ll either walk, take the bus or a taxi. 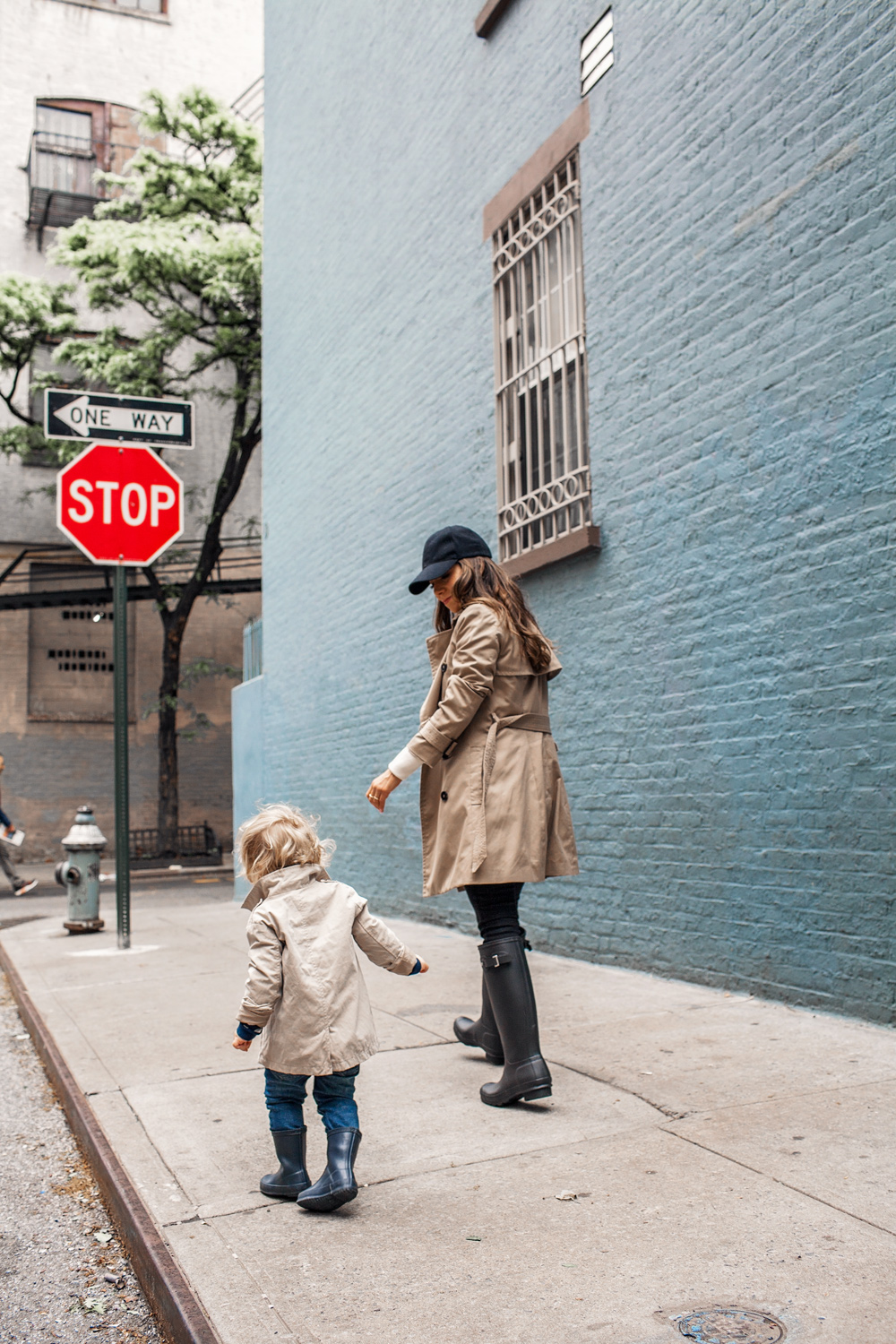 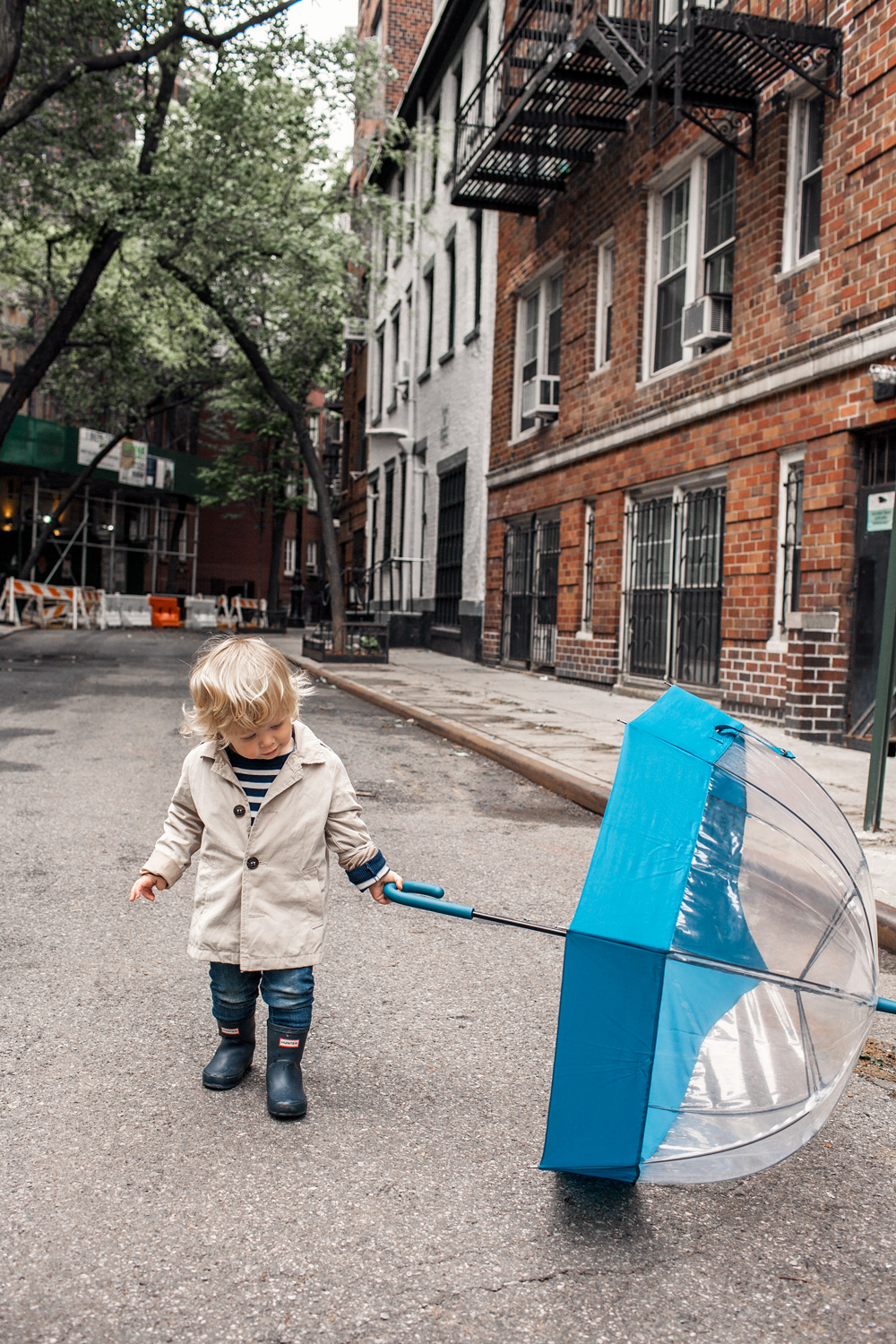 As for changing stations, this is one of the most frequently asked questions. Unless it’s a new establishment, anticipate that a changing station in the restroom is not available. We’ve used this changing pad station from day one. When Sebastian was little, we’d ask the owner of the establishment the best place to change a baby and they would gladly point you in the right direction. Now that he is older, we change him in the bathroom standing up. I imagine this gets a little easier as he gets older.

So many of these things I never anticipated while I was pregnant.

The one thing that I did anticipate is the cost of daycare and school. I feared it. I heard so many stories about the cost of both. Matt and I would always look at each other and just agree to cross that bridge when we got there.

The cost of school is why we’d leave the city, especially since we want more kids. In some cases, the cost is the same as rent. As you remember, we had Sebastian in daycare for a few months. I decided to take him out for other reasons, but the cost was a big factor.

With it just a few years away, we’ve been using Digit to help us stash away money for Sebastian’s schooling. I really don’t know what we’re going to do when it’s time to put him in school. Matt went to private school and I went to public school, so we’re open to both conversations. At this point we don’t know a lot about the schooling in the city, so we’re trying to have as many conversations as possible. I’d love to hear input from any parents in this situation.

Growing up in the midwest, our childhood was quite a bit different but we did similar things.  We made friends with the neighborhood kids. Sebastian does something similar but on a much larger scale. See, in new york, funny enough, you run into the same people over and over again. Swim lessons, the park, festivals, you see them all over. So we’ve started making friends with neighborhood kids. We just happen to have hundreds and hundreds of neighbors.

On this note, Sebastian doesn’t have a backyard or a street to play on. We consider Bryant Park, Central Park any other park in the city our backyard. It’s certainly not as easy as opening the back door and letting him run outside, but it does force Matt and me out of the house daily. 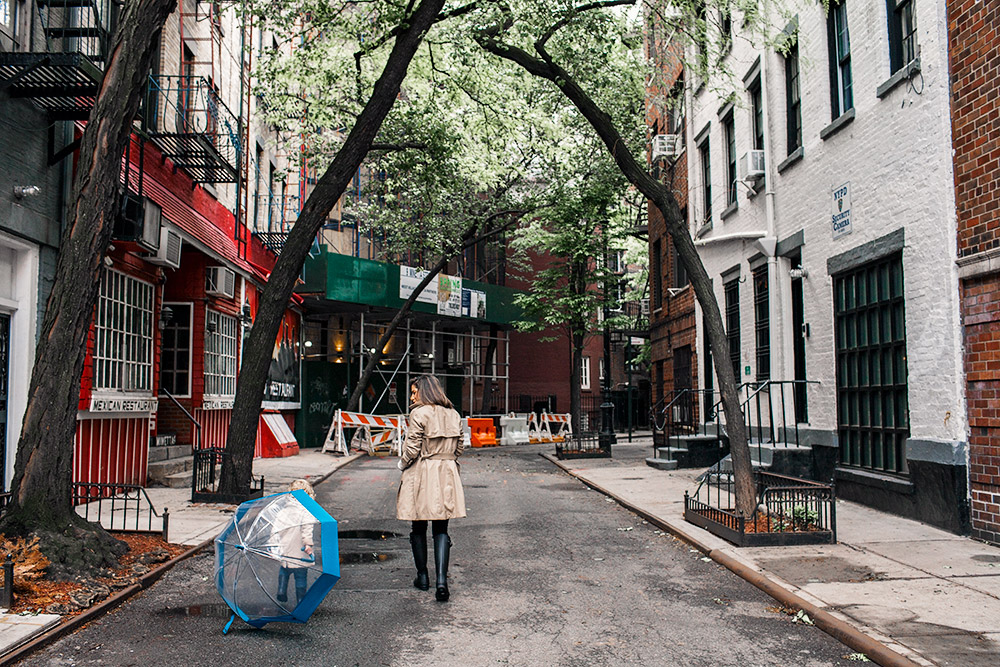 Benefits from these experiences

Living in Manhattan comes with challenges for sure. The crowds, the cost, the smells, the trash, the traffic, the weather. And even though that turns off so many, there are so many great reasons and why we love raising a kid in New York City. For starters, he is meeting kids from all over the world and hopefully, he will have an appreciation for all cultures an early age. We love this part of New York City. It is a cultural mecca. He is constantly interacting with new people every single day. Sebastian comes with me and/or Matt wherever we go that day. We love to take him on our trips too. I certainly think having him running around with us every day has helped expedite his communications skills.

This city instills a certain culture inside you within a very short period of time. It will teach him independence and perseverance.  Can’t wait to teach him how to ride a bike. What a great story he will have.. learned how to ride my bike right by the Plaza in Central Park.

We always say, there’s a “give” about living in New York. I think most New Yorkers know that. It’s when that “give” is too much and it’s not sustainable, that’s when you move out of the city.