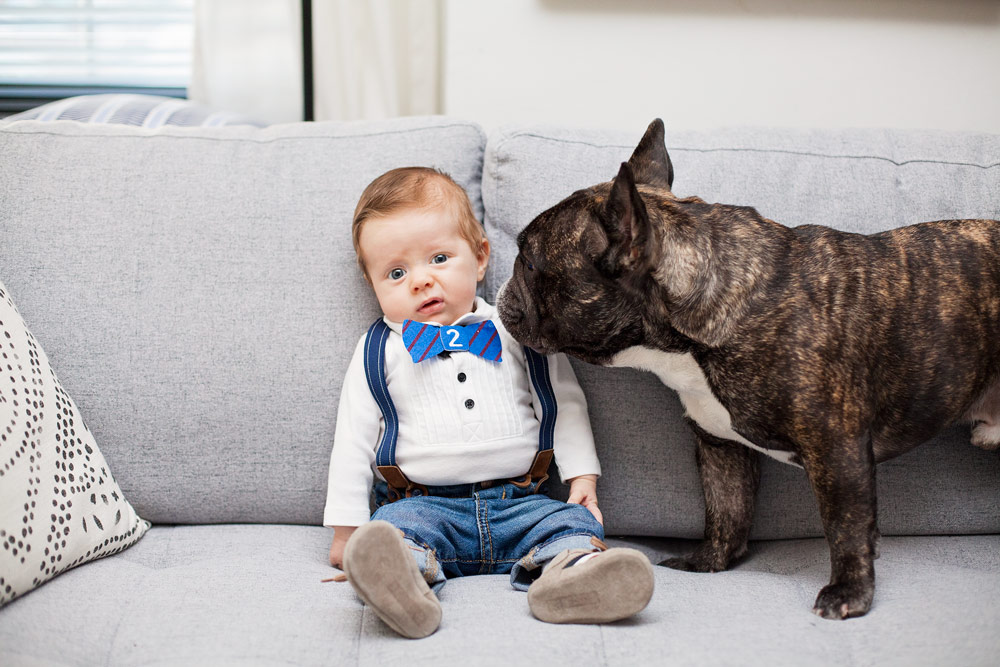 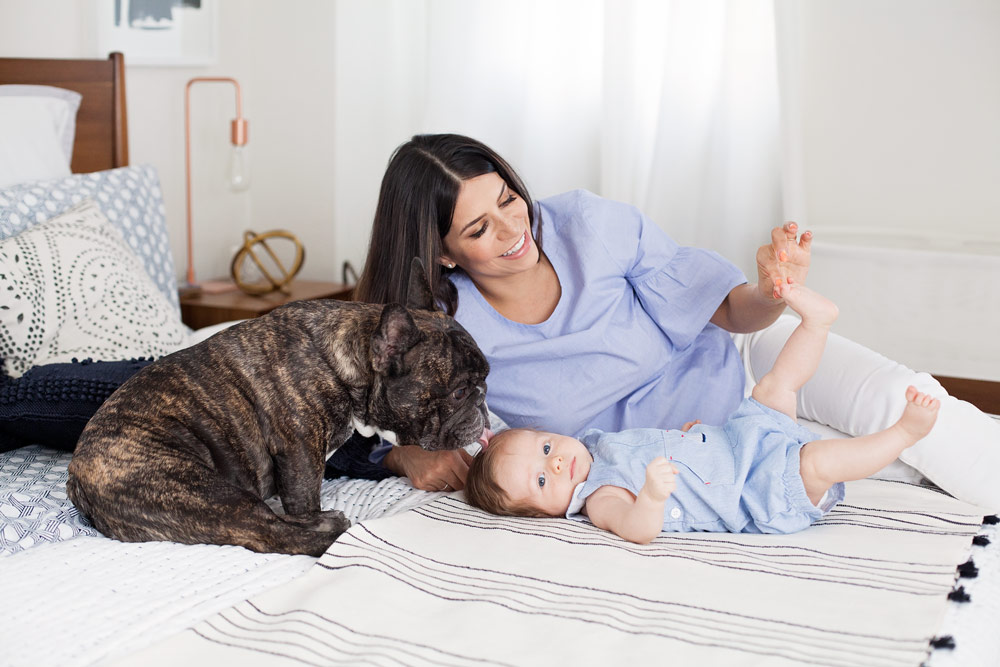 If you’re a pet owner and pregnant or thinking about having kids, you’ve probably had people tell you that everything will change once the baby arrives. If you’re like me, you probably rolled your eyes and blew them off (politely of course).

Well, they were right. Things changed but not quite as dramatically as they made it sound.

At the start of 2015, we brought home Batman and we were so happy. We had just gotten married in Mexico six months prior and were planning on starting a family…a family with a puppy! If you’ve ever had a puppy, you know the first few months can be a struggle. We had to potty train, keep him from chewing everything, limit his barking and the list goes on. Patience is key, which is something we both didn’t have much of prior to Batman arriving. 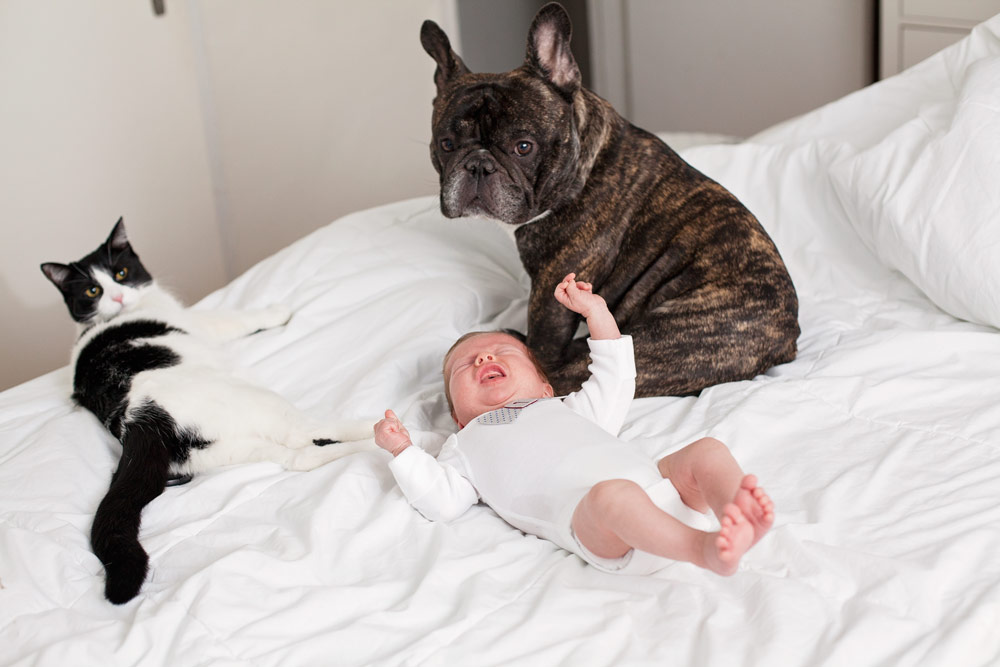 If you’ve ever seen Batman on Instagram Stories, you know he’s been the apple of our eye since we welcomed him into our lives. His squishy face, loving personality and beautiful brindle coloring were just a few of the reason we loved him to pieces.

During the summer, we love to take Batman up to Central Park and Madison Square Park to play with the other pups. Matt bought a child bike carrier so we could bring Batman everywhere with us. He was our baby. Then we got Pfeiffer. I somehow convinced Matt to let us adopt a kitten. It took quite a bit of convincing. After chasing her all over the city (figuratively speaking), I signed all the adoption papers and brought home our three-legged sweetie.

Every evening I’d come home to Pfeiffer hiding under our bed. Scared of Batman and frankly, any human. She started to come around after a couple months of us keeping her out in the living room with all of us. Slowly Pfeiffer was starting to embrace being a part of the family. She loves to meow at us anytime she has a request. If you own a cat, you know what I’m talking about!

Fast forward to December 11th, 2017 (my birthday), we brought home the most amazing gift in the world, Sebastian. As we opened up the door to get into the apartment, Batman and Pfeiffer were eagerly waiting for us to arrive. We walked into the apartment and Batman wiggled his little booty and Pfeiffer, of course, ran the opposite direction when she heard little noises coming from the car seat.

Matt sat down the car seat and Batman immediately went up starting sniffing around and tried to get up onto the car seat with Sebastian. Protective mama bear came out and we sat and held Batman so he could just sniff around Sebastian and not jump on him. You always hear stories about dogs getting aggressive when a baby comes into the home. I know they are isolated incidents and Batman is a saint, but you can’t help but be protective. He was just curious so we took the introduction very slow and let him sniff around but not too close.

Over the next few days, Batman would become more and more territorial with me and Matt. If you’ve ever met Batman, “territorial” means he’d sit his booty right on top of us. He’d also be right underneath our feet. That gets annoying when you’re walking around with an infant in your hands. Jealousy started to really kick in for Batman and I was becoming more and more annoyed with him. This has NEVER happened with him before. Something changed and I felt it. My feelings towards Batman and Pfeiffer were slightly different. I no longer woke up and made sure they were both being taken care of. I still loved them, of course, they just didn’t get my immediate attention. The first thing I worried about was Sebastian and making sure I was healing from the delivery. Thank goodness for Matt. He gave both Batman and Pfeiffer extra TLC for the first month of having Sebastian.

It’s not that I was incapable of giving them a ton of attention, I just didn’t’ have the mind capacity to think about either of them. I know this is selfish but my maternal instincts were solely focused on our newest arrival. I’ve read this article a few times and now I understand what other woman were talking about while I was pregnant with Sebastian.

Throughout this entire process, both the animals were really well behaved. At times Batman would get a little too close to Sebastian, so I’d ask Matt to take Batman off the bed or sofa. In retrospect, Batman was never a problem and I had nothing to fear, but just that small chance that something could happen. I recognize that both our pets were going through an adjustment period and we needed to help them get through the changes. We even went through a training session with Batman to prep us for this period, but in all honestly, nothing could have prepared them completely. 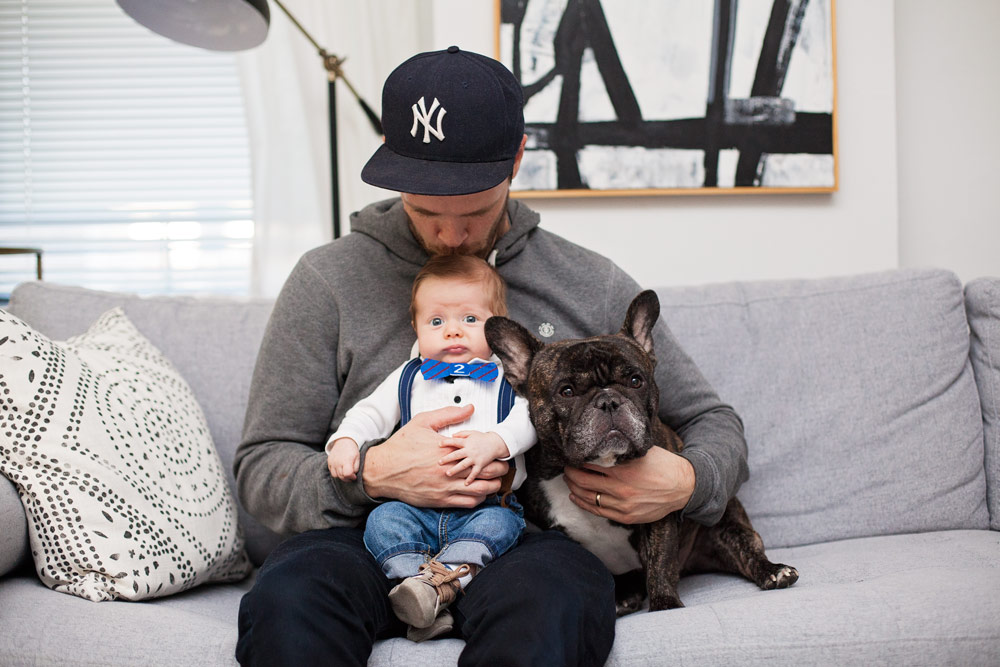 Most days, Batman would sulk on his part of the couch because he realized that Sebastian wasn’t leaving. He was no longer the baby, who got all the attention. Matt and I both did our best to shower him with hugs and kisses when he looked extra sad. Now during photo sessions, which were once dominated by Batman, are now filled with photos of Sebastian.

Whenever guests would come into the house, we’d ask them prior to be sure to pet Batman before turning to Sebastian. It made him feel a part of the party. We also always take Batman on walks while taking Sebastian out in the stroller. We’re a little past the three month mark and things are a lot better around our house. Batman watches over Sebastian while he plays with his activity gym, puts his head on his legs whenever we’re all laying in bed and gives him kisses whenever possible. As Sebastian gets bigger, I think we’ll see a whole new side of Batman, but for now, he’s no longer the only child and I think he realizes it. They are going to the best of friends once Sebastian can play. 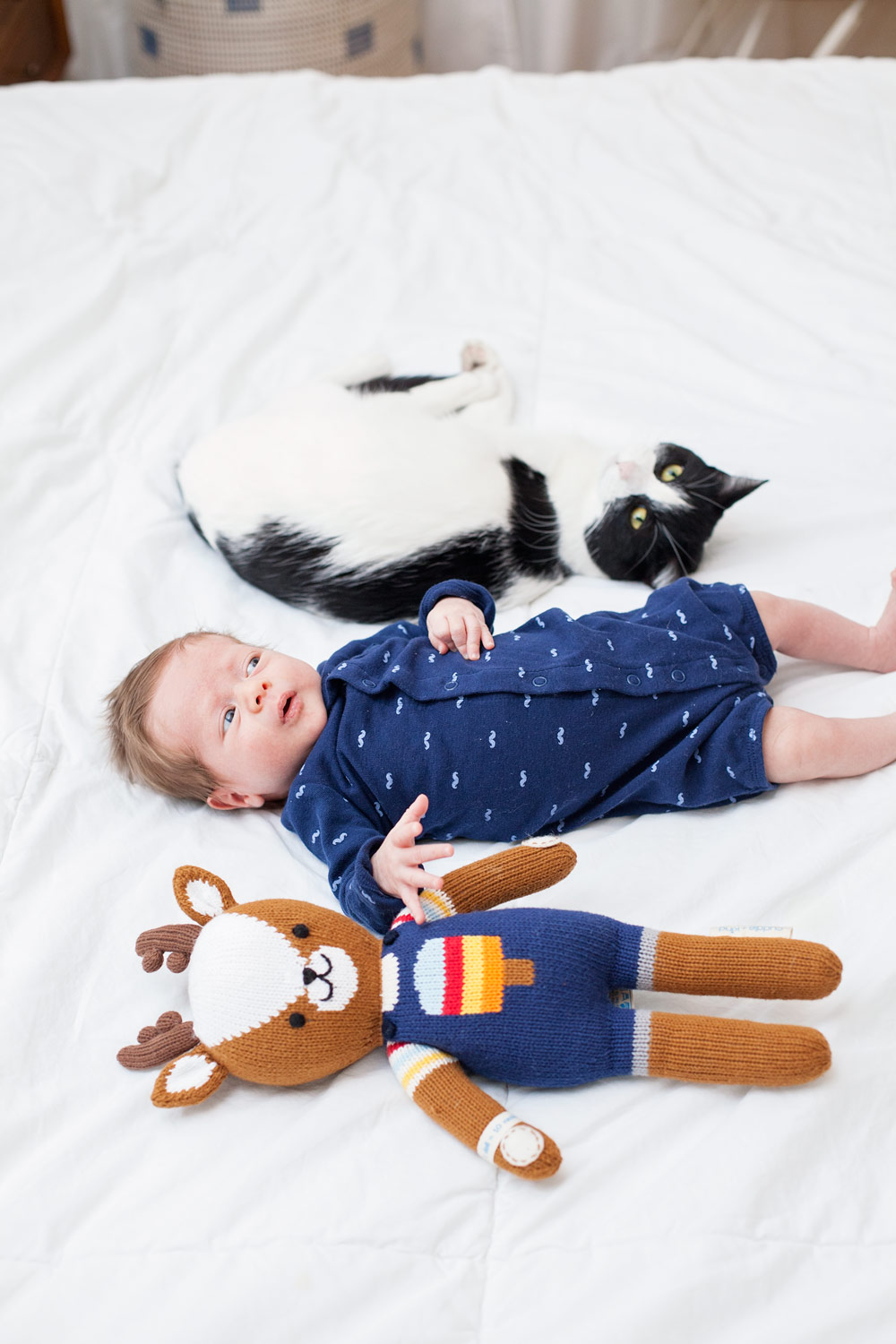 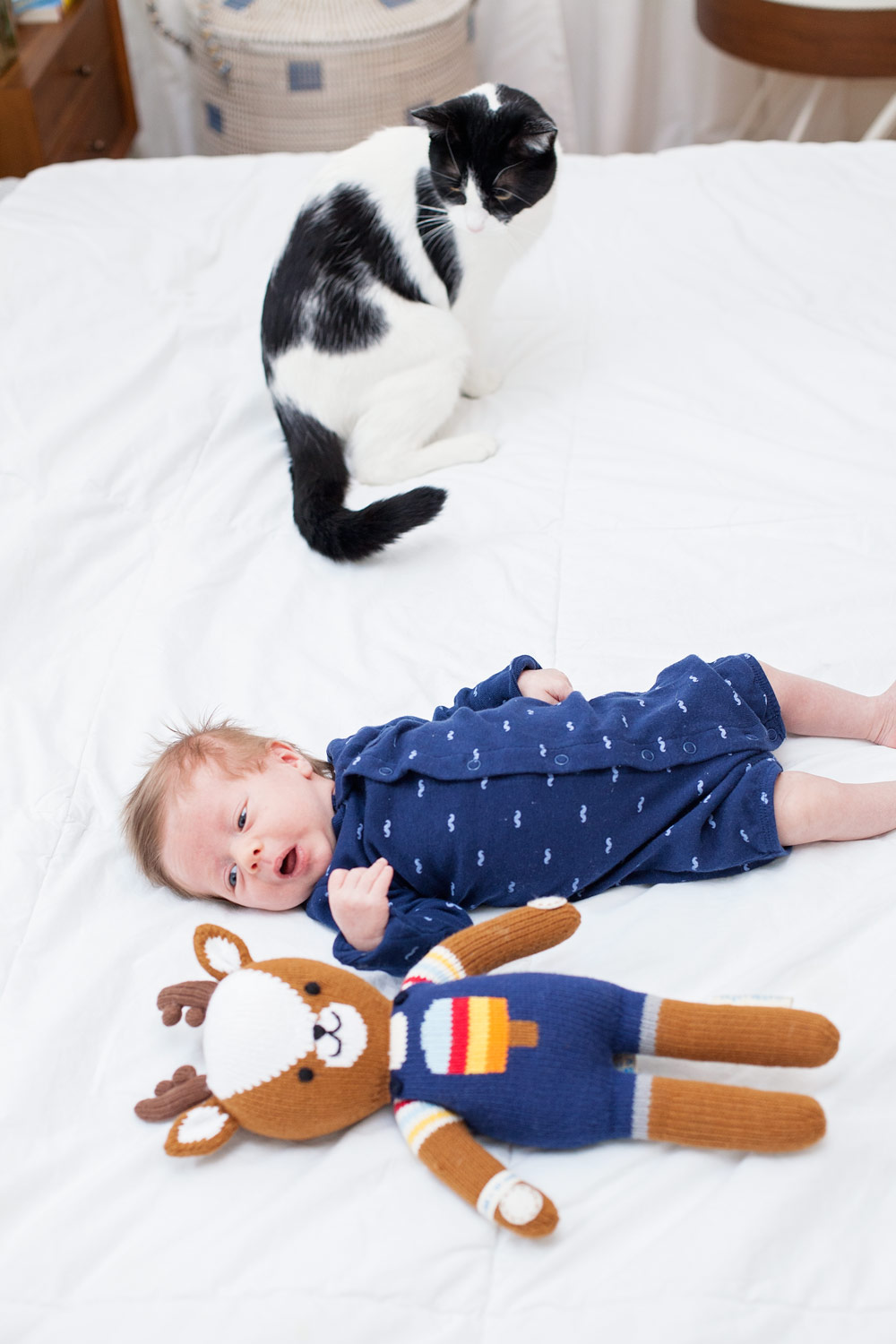 One of the most surprising reactions was from Pfeiffer. For the most part, she’s always been independent and wasn’t much of a cuddle bug…till we brought home Sebastian! Afterwards she become even more vocal and wanted even more attention. While I was pregnant, she’d switch back and forth to her favorite parent, but after Sebastian, she wanted SO MUCH attention from me and Matt (as I write this, Pfeiffer is sitting in my lap).

Anytime we weren’t holding Sebastian, Pfeiffer would come up to either of us and start rubbing her face on our leg, under our hands or even jump into our laps. Like Batman, she’d sulk at times because she had more competition for our attention. She has started to embrace the change and understands that Sebastian is now part of the family.

Every night the five of us pile on the bed and cuddle. I think they finally understand that Sebastian is now part of the family. It’s been quite adorable to see them grow-up alongside Sebastian even in just a few short months. In fact, this morning Sebastian started to pet Batman. My heart melted. I’m sure in a few more months, they’ll all be taking naps together on Sebastian’s activity gym! 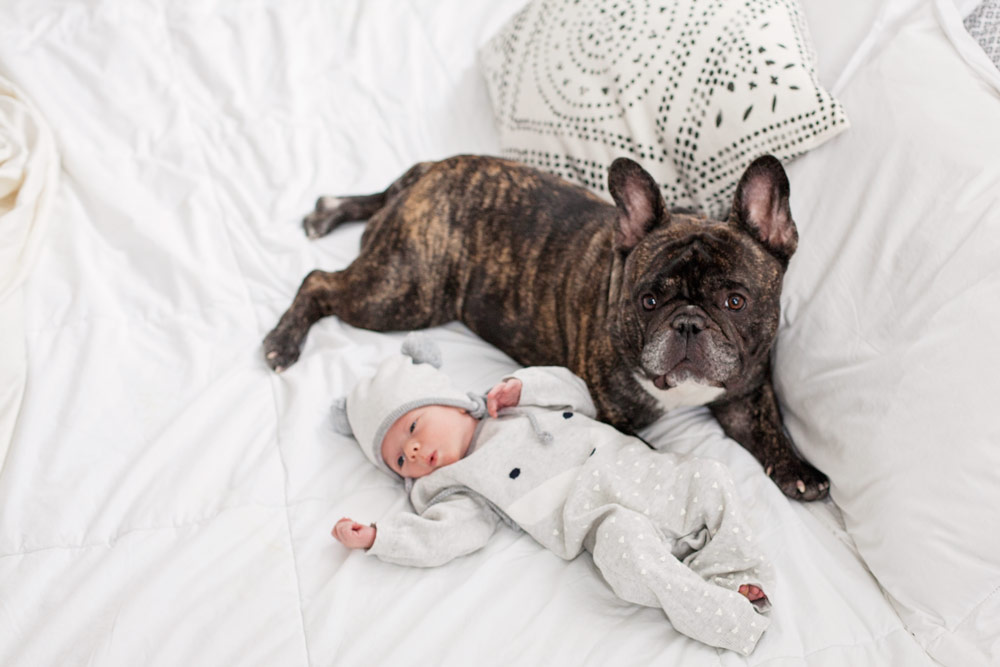 Here are a few tips:

Hope this helps those who are welcoming home a little one into their home with pets.

Has anyone else had a similar situation when it com to pets? Any other tips we should think about implementing before the next kiddo arrives? Thanks for reading!